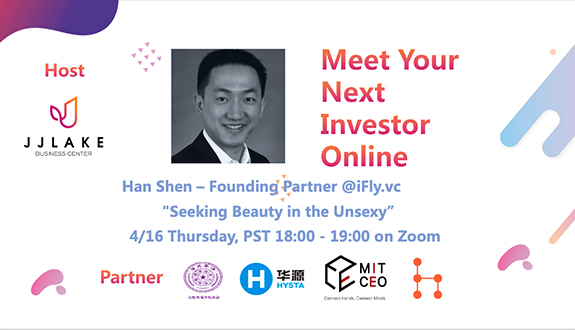 iFly.vc embraces investment opportunities in spaces that may appear unglamorous but carry tremendous growth potential. It focuses on technology-enabled transformation across the value chain of traditional industries to address underserved and underappreciated demand. iFly Fund I's performance is ranked the top-tier among all 2016 vintage VC funds in the US, according to Private Investment Benchmarks by Cambridge Associates. iFly Fund II was launched recently and is underway to close two new investments as lead.

Han Shen is the Founding Partner of iFly.vc. Han’s career in venture capital started in 2009 and has spanned at VantagePoint and Formation 8, where he was the first hire on the investment team. He led and/or contributed to the investment in AlertMe (acquired by British Gas), Comfy (acquired by Siemens), Lucid (acquired by Acuity), Motive Drilling (acquired by Helmerich & Payne), Oculus (acquired by Facebook), and Taxon (acquired by DuPont). Han has served on the board of multiple portfolio companies including BorderX Lab, SayWeee!, Camp Six, Motive Drilling, and has closely advised entrepreneurs in building a startup from the ground up. Earlier in his career, Han worked for Rohm and Haas Company, the largest US specialty chemical company (acquired by Dow Chemical for over $15 billion), where he was credited as key inventor of four US patents. Han earned his bachelor’s from Nanjing University, Ph.D. from the University of Chicago, and MBA from The Wharton School of the UPenn.